The big question at the top of my mind is how the hell am I going to carry extra fuel on my bike on this trip to Alaska.  The V-Strom has a 5.3 Gallon gas tank and I am getting a range of around 225 miles to the tank.   I am using soft panniers that hold 26 liters each side, so that isn’t a lot of space to carry fuel bottles in the side panniers.   I am going to use the mosko moto duffel bag for my main gear bag, and I don’t really want to put fuel containers in that bag in case there is a leak or a spill.   I might be wrong, but gas and tents probably don’t do well together.

I did an Alaska trip in 2009, on my friend, Troys BMW 1150GS. (I am sure this won’t be the last time you hear about that trip.)    When I did that trip, all I really needed to do was show up and start riding.   I used every piece of his gear and mimicked his setup for carrying my gear.   In my opinion it worked for Troy, so why mess with it.  That included a gallon gas can strapped to the duffel on the seat. It worked and I needed the fuel multiple times on that trip as I wasn’t really great at stopping to get gas.

So now that I am getting ready to take this trip on my own bike, and I have been obsessing every waking moment over ever piece of gear, the topic of fuel needed to be addressed.   I knew what I didn’t want and that was a gas can strapped to my bike or to a bag so that I had to mess with the fuel container every time I needed to get into the duffel.    As I said earlier, I didn’t want the fuel in my duffel because of the possibility of a fuel spill, and frankly I didn’t feel like I wanted to carry extra fuel to the campsite each night if the fuel was in the duffel.  Side panniers were just too small and didn’t seem to solve the issue of easy access.

I did have a 1 liter MSR bottle that I use frequently for my camp stove, so I began thinking that might be a bit better option then the plastic container.   I would probably need a couple of them,  so I can get a bit more range if I do run out of gas.  The ALCAN is a long road and gas stations can be are and few in between.

Off to the webs I go.  What are others doing for fuel containers and how are they mounting or carrying them on their motorcycle?   The inter webs are wonderful place, don’t you agree?

I saw some great ideas on how to bolt the canisters to your frame using the equivalent of pipe clamps and hardware.  Looks good and certainly a cheap option, just didn’t have the room that I thought I would need, and didn’t really want to mess with tools to remove the canisters when I do run out of gas. And I know that I will.

I even tried to make a duct tape container strapping system that I could strap on to the frame of the bike, but just didn’t feel that it was quite strong or stable enough for 8000 miles of travel.  I was very impressed with how well that little duct tape holder turned out though.

Well after talking myself out of all of my homemade options, I settled on some Dry Spec Tool Tubes from Twisted Throttle.  They are the perfect size for the MSR bottles and they mount with a standard nut and bolt. The challenge now is to figure out where I am going to put them.    I believe the standard use would be so you could bolt it onto your hard case luggage; the tool tubes are provided with rubber washers for waterproofing once you drill out your box.

I had previously installed the http://www.AdventureTech.biz luggage guards to give my soft panniers some vertical structure, and the spacing of the guards to the frame gave me about 4 inches to work with. The Dry Spec Tool Tubes were about 3.5 inches.

I found a bunch of appropriate diameter clamps made out of a nylon strapping and metal fasteners commonly used for reflectors and lights for bicycles that had a nice bracket that could be rotated to a 45 degree angle so the Tool Tube could mount to the bracket after the bracket was mounted to the strap.

Well it worked!  Getting the fuel containers out requires a bit of effort because those moto reflectors get in the way , but hey, they are bendable, right?

The next test will be to load the Dry Spec Tool Tubes up with the fuel containers and take a ride.  I am keeping my fingers crossed that on rough terrain, the extra weight of the fuel doesn’t mess with the luggage guard installation.  Also, I am hoping the brackets used, which are designed for a fairly light application, will work for the weight of the fuel.

If the setup doesn’t work, there is always duct tape or I can convince ChapsMule to carry my fuel.

We may be pushing 45 degrees this weekend in MN.  Maybe I should road test this install. 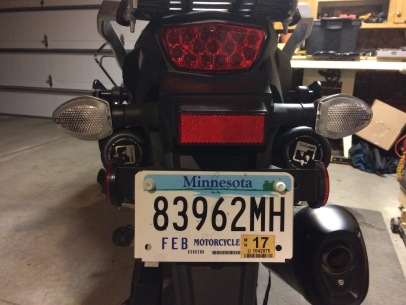 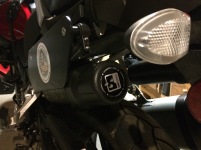 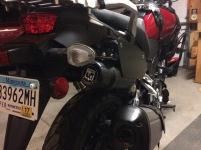 3 thoughts on “Dry Spec Tool Tubes on the V-Strom”